People have been walking the narrow streets and alleys of the historic city centre of Kampen for centuries. The street pattern has hardly changed. The city has always been a backdrop for soap manufacturers, bag carriers and for the shoppers.

For some time, Kampen photographer Bouke Peterson’s main focus has lain with the numerous enchanting intimacy of the narrow streets and alleys within the historic centre of Kampen. Peterson gets up at the crack of dawn to record the slowly awakening city, from the very moment the first sunbeams kiss the age-old walls. The early lone cyclist. The first rambler. It results in beautiful timeless, serene black and white images. Still-lives of the street. A single bike, casually cast aside against a rough wall build from medieval bricks, casts its elongated shadow over the cobblestone pavement. The glimpse through the Vispoort is reminiscent of melancholic paintings by Giorgio de Chirico. It exudes some of the atmosphere from Chirico’s “Pittura Metafysica”; a feeling of abandonment, the elongated shadows and arcades.

Peterson, who is trained as a teacher and painter at the only art academy ever to be established in Kampen, provides a picturesque image of the city. A magnificent composition, an eye for detail, but above all: a painterly light that characterises his pictures. These features are the foundations of a lengthy and intense process, which starts with observation. Endless observation… Discovering the world around him. When most people are still tucked up in their beds, he explores, continuously observing and photographing, the city centre. Constantly searching for places estranged from every-day reality by an extraordinary light that forms an enchanting colourless world in their own right. This pictorial quest requires patience and perseverance. It is not until that magnificent sunlight warms the earth and Peterson has captured a unique image in no more than a fraction of a second, that his determination is rewarded.

This authentic connection between Peterson, Kampen, and the world surrounding him touches me and many others !

Would you like to join Bouke Peterson on one of his quests? You can! Please email kampenandbeyond@gmail.com or call +31-(0)6-181 60 410 for a street photography workshop by Bouke Peterson.

The pictures are available in a limited autographed edition for €350 a piece, including a black wooden frame (42 x 43 cm) with a passe-partout. Shipping not included. The serie can be purchased as a whole with 10 % discount.

The narrow streets and alleys can also be discovered during the Daytrip Kampen under guidance of M.A. Reinier de Wit.

Bouke Peterson is one of The Favorites of Kampen and Beyond 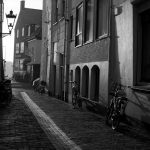 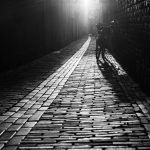 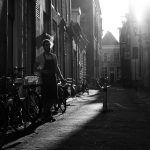 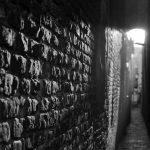 Bouke Peterson is a professional photographer and has worked on numerous different projects in and around Kampen city centre. For instance, the 2012 Reflection series, with images of beautiful reflections in the city’s canal the Burgel. This resulted in an exposition in the municipal exposition hall in Kampen during the summer of 2014, which attracted a record-breaking number of visitor. In 2013 and 2015 his work was nominated for the Art Award Kampen.

Peterson is also a portrait specialist since 2015. In this capacity, he has been able to help many entrepreneurs by creating a powerful profile picture for the growing LinkedIn community. A beautiful presentation photo on a company website. Musicians for a band photo. He considers it to be an inspiring challenge to achieve the best result together!