‘A Warm Welcome’
Saturday, April 21th, 2018 is a day I will remember for a long time: the first day that I, as one of the founders of Kampen and Beyond, arranged a program for more than 100 American guests in Kampen and Giethoorn.

For the third time in a row, I gathered a team of local guides for a guided walking tour in Kampen for an American travel company, exploring the waterways and cities of Europe. Later on I was asked to accompany the guest to Giethoorn as well.

In this way I fully experienced a day in the lives of our American friends. And as I can already tell you: it was very special! A milestone in the three-year anniversary of Kampen and Beyond: an American dream come true, so to speak.

The day started pretty early for the group. At 07.00 the cruise ship arrived from Hoorn in Kampen and an hour later we were on our way to Giethoorn by coach. About fifteen years ago I worked as a tour guide in Italy. It felt so good to get back in the coach after all this time and greet the people with a ‘warm welcome’. The usual tricks and jokes of the bus drivers also felt like a warm bath!

Unique worlds
Preparation is half the work, so I explored both routes from Kampen to Giethoorn in advance and made notes. I try to involve groups as much as possible in my stories. Years and specific figures can be important, if dosed. I told the group that Kampen and Giethoorn are different worlds only 40 minutes seperated from each other: city – village, river landscape – marsh area, rich merchants – poor peat diggers. This storyline enabled me to swich to the current situation in the Netherlands: for example the centuries-long struggle of the Dutch against the water and the search for new energy sources: from peat from Giethoorn, to gas from Groningen to a ‘sustainable economy’ and windmill farms in the sea.

Speaking of the sea: that story came up on our return to Kampen, driving along the polders, with it’s beautiful tulipfields, the story of Schokland and the passing of the unique Balgstuw: an inflatable dyke. People asked many questions and were genuinely curious! One sign along the road said: ‘You are now driving on the bottom of the sea’: astonishing!

American national anthem in Kampen
Back in Kampen, the group in the Bovenkerk was welcomed by city organist Ab Weegenaar. What followed was a concert with various classical pieces such as Bach and Mozart. In my opinion, Ab gave a great show: what a profound sound rises from that immense organ! Ab blew the wind through the 3200 organ pipes and also fueled the American spirit. At the end Ab started the American national anthem. Everyone stood up, sang along and some were moved to tears. Then you really realize how someone like Ab, with his unique skill sets can make the difference. After the concert, I was able to accompany a couple to the chemist: probably for some extra tissues for the tears

Quantity and Quality
After lunch on board – it’s a kind of floating city, equipped with all the comforts – it was time for me and my team of city guides to perform. At the appointed time and place Cor Adema, Tiny Visser, Bert Hazenbosch and Nelleke Hoekstra were ready for their city walk. With these experienced and skilled guides you already know that the day is ‘in the pocket’. And fair is fair, the weather helped us, with about 70 degrees Fahrenheit!

Despite the critical sounds you sometimes hear about tourism and large groups, I believe that quantity does not have to be at the expense of quality. A lot depends on organization and – there you have it again – preparation.

Thus the guests were neatly divided into groups. And thanks to the ingenious ‘quiet vox’ system we were able to tell our story, while walking: we spoke through the microphones around our necks and the guests had ears. So with the help of this organization, among other things, I was able to show the group both the typical highlights but also got the opportunity to go ‘off the beaten track’.

And afterwards: enthusiastic people, a man of 93, who played angry, saying he had to walk firmly but ‘it was worth it!’

‘So now, ladies and gentleman we are at the end of the tour. It was my pleasure guiding you and I wish you a very pleasant day and journey!

And for us: luckily we still have the photos, see gallery below!
Reinier de Wit 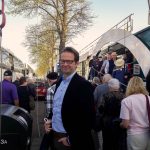 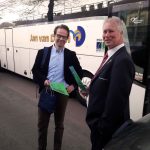 Getting acquainted with the driver of the coach 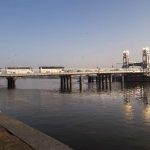 We are on our way to Giethoorn 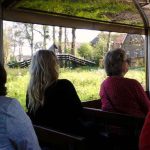 Exploring the canals of Giethoorn and it’s lovely bridges… 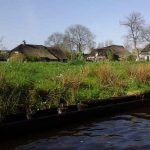 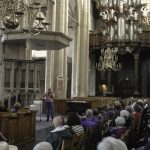 The group is welcomed in The Bovenchurch 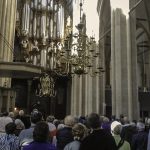 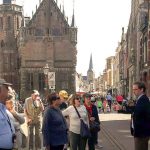 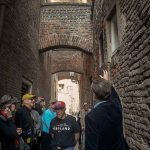 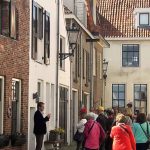 and hidden spots in the historic centre 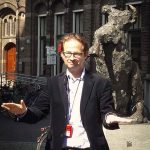 ‘I hope you enjoyed the tour!’